Home Sankta Lucia – who was she?

Sankta Lucia – who was she? 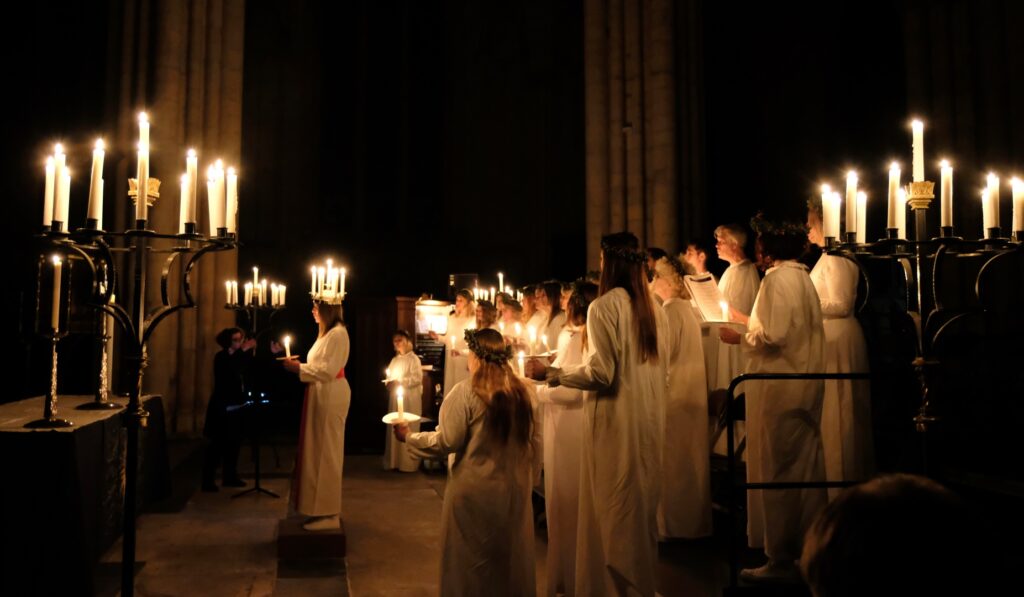 The modern Swedish Lucia celebration connects pagan and Christian traditions. According to the Julian calendar, used in Sweden until 1753, the night between 12th and 13th December was the longest night of the year, when it was believed that extra protection was needed against darkness and evil. People would stay up all night eating and drinking, and celebrate the sun’s return in the morning. In these ideas, linked to light and darkness and the passing of the year, the Swedish festival of light has its earliest origins.

December 13th is also the saint’s day of St Lucy. In the early 4th century a young woman called Lucia was martyred in Syracuse, Sicily. According to one legend, she refused to marry a pagan nobleman and to make a sacrifice to the Roman emperor. Her punishment was death, but she miraculously survived several attempts to kill her and did not die until she had received the last sacraments. In the procession, Lucia’s crown of candles may symbolize a halo and the red sash martyrdom.

Lucia’s story and her name, with its associations to lux, light, reached Sweden via Germany and England. Her day became an important marker in the farming calendar, signalling the end of the year’s chores. A pig was slaughtered and there was feasting on the eve of the Christmas fast. Being a symbol of light in the long dark season, Lucia and her day continued to be celebrated even after the Reformation.

There is a description from 1764 that gives the first account of a Lucia in a white gown carrying candles: “Just as I was enjoying my best sleep, vocal music could be heard outside my door, which woke me up. A white-clad woman entered, with large lit candles in silver candlesticks which she placed on the table, and then another one entered with a small table set with all sorts of delicacies…” In the middle of the 19th century, the Lucia song was brought to Sweden from Naples. Sul mare luccica l’astro d’argento is about a little fishing port, Santa Lucia. It was given a Swedish text, about the Swedish custom, and became very popular.

Nowadays, on 13th December, a white-clad Lucia and attendants appear in practically every Swedish home and school, church and office, hotel and club. During the 20th century, the custom of Lucia processions spread to the other Scandinavian, and some Baltic, countries.

Nowadays Lucia is admired as one who, though young and a woman, had the exemplary courage to go her own way. Lucia is also an enduring symbol of light in darkness.